The Great Outdoors is, well, great, but there’s also danger in them thar hills, and it pays to know what to do when you encounter it.

I’ve talked about animal bites in videos, but I haven’t shown you any actual animals. Although we’re here at the Birdhouse Inn, the best bird’s eye view of the mountains in the Great Smokies, we’re not talking about birds today. We’re talking about bears.

Bears are mammals of the family Ursidae, and I’ll bet you don’t know what their closest living relative is: It’s seals. There are a number of species of bear but the one around here is the American black bear. 1800 bears live in the Smoky Mountains and many of them have become very accustomed to humans.

There are several in the area around this property, mostly youngsters that have decided that Halloween pumpkins are a tasty treat. I guess we should have known, because bears, indeed, eat more plant matter than meat, taking in opportunistically whatever they can find, like acorns. Poor crops of such foods, called mast, result in bears moving out of their back country territory to look for alternative food sources, like your trash. Even though black bears are only 8 ounces when they’re born, males (also known as boars) can wear 500 pounds or more. This puts you in danger, no matter how “cute” you think these critters are.

To prevent injuries from bear encounters, situational awareness is the order of the day. Watch for disturbed trash, fresh tracks, and of course, actual bears.

Some basic advice: Don’t hike alone. Whenever possible you should hike in groups, 90% of people injured by bears (mostly grizzlies, I suspect) in Yellowstone National Park were alone or with only one other hiking partner.

Avoid hiking at dawn, dusk, or at night, times that bears are out in warm weather months. You’re just as likely to come upon a bear as it is to come upon you.

You might think it’s not too smart to yell “Hey, Bear!” or sing “The Star Spangled Banner” on the trail but, actually, bears don’t like noise and it’s actually a pretty good strategy, especially when traveling near babbling brooks or other settings where normal hiking noises might be muffled. Just don’t do it with a hamburger or hot dog in your hand.

When you encounter a bear, it will, hopefully, be at a distance: If so, and the bear doesn’t see you, keep out of sight and go slowly behind and downwind of the bear. If the bear does see you, slowly retreat the way you came. A bear in defensive mode will huff, hiss, or slap the ground with its paws, telling you that you’re too close. So put some distance between you and the bear. However, don’t run, it might activate a chase response in the animal.

If the bear follows you quietly, ears erect, and its attention is clearly directed at you, it is likely in predatory mode and not acting defensively. Make yourself appear larger, louder, and threatening. Groups should stay together to look like a bigger threat. A bear that is initially curious or testing you may become predatory if you appear meek. A deterrent like pepper spray, at least, or other items of personal defense will become very handy. Pepper spray is most effective at close range, say 5-10 feet.

If the bear attacks, don’t run. You can’t outrun a black bear. Don’t climb a tree unless you’re a squirrel, you’re not 10 years old anymore, it takes longer than you think, and your pursuer is a very good climber. Use your deterrent and fight for your life, because that’s what’s at stake. Kick, punch or hit the bear on the face, eyes, nose, with whatever you have.

You also should not play dead. Bears will feed on carrion like deer carcasses, so why pretend to be one? If you do, however, keep your backpack on, lie face down and clasp your hands over the back of your neck with your elbows protecting the sides of your face. A bear that’s just protecting its cubs may decide you’re no longer a threat.

Which leaves you with bite and claw injuries that may be bleeding, so make sure that backpack has dressings, tourniquets, antiseptics, and other supplies needed for treating wounds. Here’s an article on dealing with animal bites and one on active bleeding from sharp trauma.

Studies have shown that bears accustomed to humans never live as long a life as truly wild bears. Bear lose their fear of people by being fed by them. As a result, many of these are hit by cars or end up euthanized. Remember this: A bear that’s fed is a bear that’s dead.

Can’t bear to be without a good medical kit? Check out Nurse Amy’s entire line over at store.doomandbloom.net! 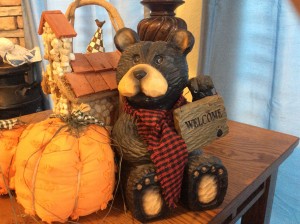