Cholera is an infection of the small intestine caused by the bacterium Vibrio cholerae. Cholera has been the cause of many epidemics in the past. Even in modern times, millions of cases of cholera are reported every year worldwide, with over 100,000 deaths. There have been 7 cholera pandemics recorded since the 1800s, and a major epidemic occurred after the earthquakes in Haiti a few years ago.

Disaster scenarios that cause contamination of water supplies can easily cause an outbreak of cholera in a community. Therefore, it makes sense for the medic in the family to know how to identify and treat the disease. Untreated, cholera has a death rate approaching 50-60%; if dealt with quickly, however, mortality goes down to 1%.

Transmission of cholera occurs as a result of eating improperly prepared food or water contaminated with the feces of an infected individual. Cholera is not uncommonly found in seafood like oysters that ingest plankton (a collection of tiny organisms that form the bottom of the food chain).

Human stomach acid does a reasonable job of killing most bacteria that are ingested. Note that I say “most”. The cholera bacteria that survive make their way into the intestine, where they penetrate the walls and begin to cause symptoms by producing toxins.

Symptoms of cholera present themselves within a few hours to a few days after infection. The patient will experience the rapid onset of watery diarrhea, historically called “rice-water stools”. In a certain percentage, this will be severe enough to cause major dehydration, the major cause of death. This can happen in an alarmingly rapid fashion, within hours in some cases. Even the mild cases are problematic, as they increase the risk of spread of the illness.

Other symptoms related to dehydration include:

Modern water treatment facilities have eliminated Cholera as a major issue in most developed countries. Even in the aftermath of a disaster, proper preparation of food and sterilization of water will prevent an outbreak. For this reason, the family medic must supervise these functions closely when off the grid. An effective water filter like the LifeStraw (one word) is an important medical supply in this situation, and careful attention to hand washing is a must.

The proper disposal of human sewage is also an important factor in preventing Cholera, or any infectious disease for that matter, from running rampant in a community. Appropriate construction of latrines at least 200 feet away from sources of drinking water is necessary. 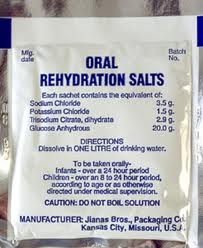 Swift action is needed to prevent a Cholera infection from causing life-threatening dehydration. Oral rehydration salts are commercially available, or can be homemade by adding to a liter(2 liters for children) of water:

In this way, balance of certain chemicals in the body called “electrolytes” can be maintained. In the worst cases, intravenous fluids such as normal saline or ringer’s lactate might be needed, with a source of added potassium.

Fluids are often enough to stabilize the patient, but antibiotics can decrease the length and severity of the disease significantly. Doxycycline (in veterinary form, “Bird-Biotic”) is considered a first-line option. Other choices include Tetracycline, Erythromycin, and Ciprofloxacin (Fish-Cycline, Fish-Mycin, and Fish-Flox, respectively, in veterinary form), although resistance has been reported. Reserve use for the severe cases.
Supplements containing zinc may also be helpful in both treating and preventing the disease.

Although effective vaccines exist for Cholera, they are limited in their commercial availability and restricted mostly to those traveling in countries at risk. They are, unfortunately, relatively short-lasting, giving protection for about 2 years.

In normal times, citizens of developed countries have little to fear from Cholera. In a survival setting, however, it can and will return to wreak havoc over those who fail to pay close attention to sanitation and hygiene.

Do you have the medical supplies needed to deal with medical issues during or after a disaster. Check out Nurse Amy’s entire line of medical kits specifically designed for off-grid scenarios at store.doomandbloom.net

You can also check out 185 5-star reviews on Amazon for our bestselling book “The Survival Medicine Handbook”, the information you’ll need if the ambulance isn’t heading in your direction.

Measles
Videocast: Around the Cabin #4