It’s the 4th of July, and many proud Americans will be celebrating with fireworks. An unlucky (or careless?) few will wind up running afoul of their own pyrotechnics; just ask my old buddy “Three-Fingered Fred”. He’ll tell you.

Let’s face it, the safest way to enjoy fireworks is to be a spectator at your home town’s 4th of July event. Statistics show that from June 20th to July 20th of 2014, fireworks sent an average of 230 people to the hospital every day. 9 deaths were recorded, of which 2 were just innocent bystanders. Throughout 2014, there were more than 10,000 fireworks-associated injuries treated in U.S. emergency rooms.

Despite improvements in fireworks safety, injuries from accidents are rising. There were 349 injuries in Illinois alone in 2017, a 226% rise since 2008. None of these statistics take into account damage caused by pyrotechnics outside or in structures, totaling millions of dollars’ worth of damage.

Most (74%) fireworks-related injuries involve the fingers, hands, face (including the eyes), and head.  Firecrackers were the most likely to be involved in mishaps. The majority of injuries were burns of varying degrees.

Many fireworks injuries (57%) are seen in children or teens, which should tell you that unsupervised use of fireworks by kids is a very bad idea. I remember one 4th of July on the beach watching fireworks when a bottle rocket lit by an 8 year-old wound up missing my head by just a few inches.

If you must have fireworks for personal use, consider these safety tips, paraphrased from the website of the National Council for Fireworks Safety, peppered with some of my own advice:

What about your pets? Curiosity killed the cat, and so can fireworks. Most cats and dogs probably won’t go anywhere near them, of course, but an investigatory sniff might get them into big trouble. They might be happier and safer inside the house.

If you or a member of your family is injured, it will probably be a burn injury. Call 911 or go directly to the emergency room after running cool water on the injury.

Following these safety tips will help keep your family safe and give you the best chance of a healthy 4th of July. Happy Independence Day!

Find out more about treating burn injuries and 150 other medical topics in the award-winning Third Edtion of the Survival Medicine Handbook: The Essential Guide For When Medical Help Is Not On The Way, available at Amazon or at store.doomandbloom.net! 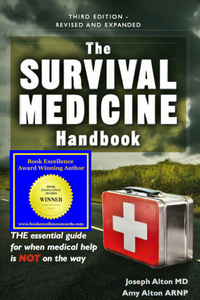