HOW TO SURVIVE AT SEA

Upon the passing of President George H. W. Bush, we should remember and honor his military service in World War II as a navy pilot. Having flown 58 missions, Lieutenant Bush was often under enemy fire. On September 2, 1944, his plane was shot down off an island called Chi Chi Jima. He was the only survivor.

He swam about 50 yards to a small life raft and fought the currents that would have caused him to make landfall on the island. As it was discovered afterwards that starving enemy soldiers were making meals of downed pilots, this was a wise choice. Fortunately, a U.S. plane had spotted him and he was rescued by a submarine several hours later.

Most cases of survival at sea, however, are not as fortunate; therefore, it’s important to have an idea of what to do if you find yourself in open water without rapid rescue. Your survival will depend on your ability to stay hydrated, obtain nourishment, and be protected against exposure to wind and temperature extremes.

Lieutenant Bush bailed out of his plane, but most people that end up in the ocean are victims of boating accidents. Before boarding any vessel, you should have a good idea of what supplies and equipment exist for use in an emergency. Your ability to access and use what’s available could determine whether you live or die.

The carrier San Jacinto knew our young future president  was out there somewhere that fateful September, but anyone planning an ocean voyage can’t say the same thing without a “float plan”. Giving the marina and others an idea of where you’re going and when you’re due back will prevent delays in search and rescue. The sooner people start looking for you, the better your chances of survival.

With a Flotation Device

In rough seas, you should always wear a life jacket (calm seas, also!). Attaching a whistle to it is useful if an individual seaman is thrown overboard. In this situation, a flotation device (life preserver) attached to a good length of rope can be thrown or a crew member sent with one to retrieve the victim.

If your boat capsizes or sinks, you have to act fast. If there is time to send out a distress signal, do so. Many supply containers are meant to float; gather as many together as possible. They can help you stay above water (and the supplies may save your life).

Unless land is in sight, it is wise to stay as close to the last known position of the ship as possible. This is where all rescue efforts will begin, so the closer you are to where the ship sank, the more likely you will be found. This is especially useful if you sink in widely traveled areas or shipping lanes. The key is to be where you can be found.

Hypothermia, or loss of body heat, is a major cause of death in boating mishaps. Water doesn’t have to be particularly cold to cause hypothermia. Any water that’s cooler than normal body temperature will cause heat loss. You could die of hypothermia off a tropical coast! Average survival times decrease as the water temperature gets colder:

40-50 degrees Fahrenheit: About an hour

The time that you’re actually able to swim or otherwise function to help yourself is a fraction of the above.

To increase your chances of survival when immersed in water, keep your clothes and zip up. Cover your head if at all possible. The layer of water between your clothing and your body is slightly warmer and will help insulate you from the cold.

Get as much of your body’s surface area out of the water. Climbing onto a capsized boat or grabbing a floating object will increase your chances of survival. However, don’t use up energy swimming unless you have a dry place to swim to. The swimming strokes that use the least are the dog paddle, sidestroke, backstroke, and breaststroke; alternate them to use different muscles.

Position yourself to lessen heat loss. Use a body position known as the Heat Escape Lessening Position (think H.E.L.P.) to reduce heat loss while you wait for help to arrive. Just hold your knees to your chest and cross your arms; this will help protect your torso (the body core) from heat loss.

Huddle together. If you’ve fallen into cold water with others, keep warm by facing each other in a tight circle and holding on to each other.

Without A Life Jacket

The above strategies work well for those with life vests, but what if you don’t have one?

If you end up in the water without a life jacket, a lot more exertion is required to keep above water. At one point or another, you’ll get tired. If you float on your back, it will require less energy to keep your face out of water. Arch your back and spread out your arms and legs; this should allow you to breathe with the least effort. 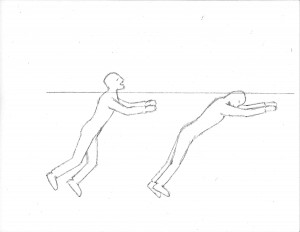 Another way to “rest” without a life jacket involves relaxing the body in between breaths. Inhale while treading water and then lie face down with arms forward. Repeat when you need another breath.

In a Life Raft

Of course, a much better way to survive if stranded in the ocean is to be in a life raft. In a raft, you can use your skills to survive longer and have a better chance of rescue. Should you get away from the ship as soon as possible?

If you’ve seen the movie “Titanic”, then you probably remember the sinking ship sucking down people in life jackets and all sorts of other debris. Using a small vessel, the cast of “Mythbusters” couldn’t reproduce this effect, but it may depend on the size of the ship. A large ship going down creates a void in the water where its mass used to be, and water will rush in to fill that void.

You want to paddle into the wind away from the wreck in case a fire starts—this is because burning oil on the water and the toxic smoke it creates will spread downwind. Once the ship has gone to the deep and fire is no longer a risk, check the water for anything that might be useful—anything not bolted down to the ship may rise to the surface to be snatched up and utilized by survivors. Many modern life rafts have survival kits and paddles built in.

If you’re in a remote part of the ocean, the direction that birds fly in may help you determine where the nearest land is. Seabirds will fly from land in the early morning and fly towards land in the evening. Also, water will appear lighter as it gets shallower. Wave swells will decrease in size as well.

The direction of the wind may help you find land. Wind usually blows towards land in the day and away at night. Dry land absorbs heat from the sun faster than the water. Warm air over land will rise and cool air over the water rushes in to replace it.  At night, water cools more slowly than land. The warmer air over the water rises and the cool air from the land rushes away.

If you’re approaching land, try to find sandy stretches of beach. Rocks and coral below the surface may tear the bottom of your raft or cause injury if you get out of the raft. Paddle sideways in rip currents and you should make progress to shore. 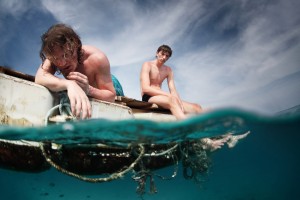 If you’re not close to land, don’t exert yourself. You need to protect your body, conserve your resources and limit your consumption. Many modern rafts have a canopy, but If you are in an open raft you’ll want to erect some sort of shelter from the elements using anything you can—a tarp, part of a sail, even spare clothing. If it’s hot, you can dampen your clothing with sea water to cool off, although this can cause skin irritation over time. If it’s cold, put as much clothing on and usually anything that can serve as a windbreak.

The floor of your life raft will be colder than the walls, so don’t sleep lying down if you’re in cold weather. If it’s hot, the floor might help keep you cool, especially if you have cover. Keep the inside of the raft as dry as possible.

A canopy can also double as a rain catch to collect fresh water, which is going to be your biggest struggle. The first day in the raft, don’t drink any water at all. Come up with a water rationing system and stick to it. The minimum amount of water necessary to stay in decent shape is 1 liter a day. It’s possible to survive on as little as 2 to 5 ounces a day, although this will weaken you over time.

Regardless of what you may have read, you can’t drink sea water. It will dehydrate you due to the large amount of salt it contains, but you can get condensation from sea water if you have a few supplies. You’ll need a pot, a smaller pot, some plastic wrap or sheeting, and 1 or 2 weights.

Save whatever food you have for at least the first day or two. You can go a long time without food, so ration it out slowly so that it will last. You might be able to catch curious fish, sea turtles, or seabirds, which you’ll just have to eat raw. Inedible parts may be used as bait. Louis Jordan said he caught fish by wiggling dirty clothes in the water and scooping them up with a fishing net. I haven’t tried this, but it apparently works. Using flashlights at night may attract fish.

Be aware that too much protein may cause you to use your body’s water to digest it. I’m told that fish eyes contain fluid that you can ingest safely.

Can you eat seaweed? The answer is often yes. Many seaweeds are part of the diet of coastal inhabitants around the world. Generally, green, brown, or red seaweeds can be washed and eaten raw or dried. Avoid the parts that are round and filled with gas; only eat the leafy parts. If you’re not sure, you can touch the seaweed to your lips and wait for a few hours to see if there is any ill effect. Be forewarned that seaweed tends to have a laxative effect and take some “getting used to”.

Another useful item for the raft is some sort of signaling device. As hand mirror can reflect the sun and be seen from a passing plane or boat. Some newer rafts come with a beacon.

One issue I haven’t covered is the dangers posed to survivors in open waters due to sharks. I plan to discuss this in a future article.

My thanks to President George H. W. Bush for being the inspiration for this article. Rest in peace.