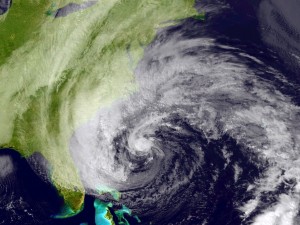 I rarely make specific “news” posts but this is a very unusual case.  Hurricane Sandy, a level 1 hurricane (highest winds: 90 mph) set to hit the Jersey Shore, is likely to be merging with 2 separate winter storms to form what has been called a “Frankenstorm” or an “Atmospheric Bomb”.  Last year, hurricane Irene, a hurricane notable mostly for hitting the same general area but not for any Katrina-like power, was responsible for 44 deaths.  Hurricane Sandy, due to its colliding with the winter storms and its large size, is going to be Irene on steroids.  Combine it with hitting a part of the country that usually doesn’t prepare for hurricanes (as we do in Florida), and we have a big problem.

As of 11 a.m., the Weather Channel has indicated that barometric pressures are lower than was measured in the catastrophic storm of 1938.  Because of this, storm surges will be higher than expected, and they were expecting 40 foot waves in some areas.  Although meteorologists can be dramatic at times, they are suggesting that some coastal areas might be “obliterated”. In the higher levels of skyscrapers in New York, winds are expected to be at 100 miles per hour or greater.  Gusts in Boston, at this very moment, are peaking at 66 mph.

IF YOUR AREA HAVE BEEN GIVEN AN ORDER TO EVACUATE, DO SO.  If you don’t, you not only put yourself in jeopardy but you are also endangering emergency rescue personnel. If you can’t leave the area, go to the designated safe shelter chosen by your municipality.  If you leave the area, head as far inland to a safe structure and to as high a level above sea level as possible.  This may not be easy, as you are heading into the cold front heading eastward.  Have your bug-out bag with more than 72 hours worth of food, warm clothes, and other supplies with you.  The 72 hour bug-out bag is an arbitrary number, you will need more than that to be prepared for this. Power may be out for weeks in some areas.  Keep your ETON emergency radio with you.

As tough as the storm is going to be, I am concerned about the aftermath, especially in the highest populated areas.  It’s too late now to stockpile supplies, so if you’re not ready now, you’re not going to be. There are few supplies available for purchase anywhere, so unprepared folks are going to be dependent on the government for all their food, medical care, and protection.  If power is out for any significant time, there won’t be orderly lines of stoic people waiting for bottled water, as there were in Japan after the tsunami last year.  Be situationally aware and keep your family and friends (and preps) close.

Stay safe and, if you’re in the storm’s path, God be with you.

Tornado: What You Should Know
Hurricane Advice by Nurse Amy