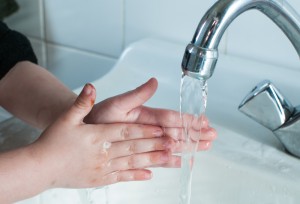 A significant factor in the quality of medical care given in a survival situation is the level of cleanliness of the equipment used.  In primitive conditions, it will be a challenge to make an environment that guarantees the best chance of avoiding infection in a wound.  It will be harder still to sterilize all of your equipment. Now, you may have heard of the terms “sterile” and “clean”, but do you have more than a vague idea of what they mean?

What Does Sterile Mean?

When it comes to medical protection, “sterility” means the complete absence of microbes.  To guarantee the elimination of all organisms, a type of pressure cooker called an “autoclave” is used for instruments, towels, and other items that could come in contact with the patient.  Interestingly, some things can be “dirty” and “sterile” at the same time.  If I put a handful of dirt in a container in a pressure cooker, I would render the dirt sterile by killing all the microbes in it.  It would still be dirt, however.

There is considerable debate, even now, as to what truly constitutes “sterile technique” and what is to be considered “clean technique”.  There is even some disagreement with regard to which technique is best in which scenario.  Although this is a discussion for a much longer article, suffice it to say that initial wound care, especially with deep wounds in the first 48 hours, should be sterile if possible.  As it becomes clear that the wound is not infected, clean technique may be acceptable (indeed, it may be all you have).  An infected wound will appear red, swollen, and feel hot to the touch (see image below).

Here are common characteristics of clean vs. sterile methods:

Sterile technique involves hand washing with special solutions and the use of sterile instruments, gloves, towels, and dressings.  When used on a patient, the area immediately around them is referred to as a “sterile field”.  In order to say that sterile technique was used, you would have to assure that only sterile items were used, and were only touched by other sterile items.  This is not impossible, but requires extra diligence (and expense) to achieve.  For example:  Clean, non-sterile gloves come 100 to a carton, while each pair of sterile gloves must be individually packaged.

Clean technique concentrates on reducing the number of microorganisms that could be transferred from one person to another by medical instruments, or other medical supplies. Meticulous washing of hands and instruments with soap and hot water is important, as is the wearing of clean gloves.  Attention is given to making sure that dressings are made of clean cloth or gauze.  In most survival settings, this may be as good as it gets, but is that so bad?

There is very little research that compares clean vs. sterile technique for wound care.   In one study, an experiment was conducted in which one group of patients with traumatic wounds were cleaned with sterile saline solution, the other group with tap water.  Amazingly, the infection rate was 5.4% in the tap water group as opposed to 10.3% in the sterile saline group.  Another study revealed no difference in infection rates in wounds treated in a sterile fashion as opposed to clean technique.

Therefore, I usually recommend clean water to irrigate wounds (see image below), although sterile saline is also fine.  If you use Betadine, make sure it is very dilute.  Betadine is cytotoxic (harmful to new cells) in deep wounds, so is best in the initial cleansing or in situations where infection is suspected. The same goes for Hydrogen Peroxide. 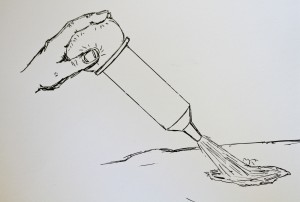 Let’s talk for a second about sterile vs. non-sterile dressings.  I usually recommend a moist sterile gauze in deep wounds covered by a less moist or dry dressing on top (“wet-to-dry dressing”).  However, consider this: A 2006 study in the Canadian Journal of Plastic Surgery took 2 x 2 inch squares of the following items and submitted them for tests to see if there were bacterial organisms on them:

Surprised that the sterile dressings came in third?  I was.  In any case, this doesn’t prove that you shouldn’t use sterile dressings where possible; it just means that, for survival purposes, we might want to conduct further research (which is what the Canadian study recommended).

Remember that your entire sick room should be kept disinfected, so as not to spread infection. Disinfectants are substances that are applied to non-living surfaces to destroy microbes. This would include areas where you would treat patients or prepare food.  Disinfection does not necessarily kill all germs and, as such, is not as effective as sterilization.

Examples of Disinfectants include:

Examples of Antiseptics include:

Examples of Antibiotics include:

Some mistakenly consider disinfection to be the same as “decontamination”. The latter, however, may include the elimination of toxic chemicals or radiation.  The removal of radioactive dust from a surface would, therefore, not be called disinfection, but decontamination.

Are you prepared to deal with medical issues in disaster situations?  If you have the #1 Amazon Survival Skills Bestseller “The Survival Medicine Handbook“, you will be!

Sleep Deprivation in Survival Situations
How To Drain An Abscess