Upon the passing of President George H. W. Bush, we should remember and honor his military service in World War II as a navy pilot. Having flown 58 missions, Lieutenant Bush was often under enemy fire. On September 2, 1944, his plane was shot down off an island called Chi Chi Jima. He was the only survivor.

He swam about 50 yards to a small life raft and fought the currents that would have caused him to make landfall on the island, where he had heard that starving enemy soldiers were making meals of downed pilots. Fortunately, a U.S. plane had spotted him and he was rescued by a submarine several hours later.

Most cases of survival at sea, however, are not as fortunate; therefore, it’s important to have an idea of what to do if you find yourself in open water without rapid rescue. Your survival will depend on your ability to stay hydrated, obtain nourishment, and be protected against exposure to wind and temperature extremes.

Plus, Amy and Joe talk about their latest book “Alton’s Antibiotics and Infectious Disease: The Layman’s Guide to Available Antibacterials in Austere Settings”, a truly unique book that may help you save lives in long-term survival scenarios…. 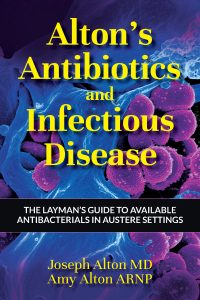