Given the horrific events surrounding the Boston Marathon bombings, we all have to realize that we are not safe, and may never be in today’s world. This article is part 1 of 3 of what you, the non-medical professional, need to know when you face the worst case scenario.  Thanks to all those who picked up the flag and assisted in this tragic event, and our prayers go to the victims and their families.

The responsibilities of a medic in times of trouble will usually be one-to-one; that is, the healthcare provider will be dealing with one ill or injured individual at a time.  If you have dedicated yourself to medical preparedness, you will have accumulated significant stores of supplies and some knowledge. Therefore, your encounter with any one person should be, with any luck, within your expertise and resources.  There may be a day, however, when you find yourself confronted with a scenario in which multiple people are injured.  This is referred to as a Mass Casualty Incident (MCI).

What is a Mass Casualty Incident?

The effective medical management of any of the above events required rapid and accurate triage.  Triage comes from the French word “to sort” (“Trier”) and is the process by which medical personnel (like you, survival medic!) can rapidly assess and prioritize a number of injured individuals and do the most good for the most people. Note that I didn’t say: “Do the best possible care for each individual victim”.

Let’s assume that you are in a marketplace in the Middle East somewhere, or perhaps in your survival village near the border with another (hostile) group.  You hear an explosion.  You are the first one to arrive at the scene, and you are alone.  There are twenty people on the ground, some moaning in pain.  There were probably more, but only twenty are, for the most part, in one piece.  The scene is horrific.  As the first to respond to the scene, medic, you are Incident Commander until someone with more medical expertise arrives on the scene.  What do you do?

Your initial actions may determine the outcome of the emergency response in this situation.  This will involve what we refer to as the 5 S’s of evaluating a MCI scene:

1.  Safety Assessment:  Our friend Joshua Wander (the Jewish Prepper of blogspot fame)  relates to us an insidious strategy on the part of terrorists in Israel:  primary and secondary bombs.  The main bomb causes the most casualties, and the second bomb is timed to go off or is triggered just as the medical/security personnel arrive.  This may not sound right to you, but your primary goal as medic is your own self-preservation, because keeping the medical personnel alive is likely to save more lives down the road.  Therefore, you do your family and community a disservice by becoming the next casualty.

As you arrive, be as certain as you can that there is no ongoing threat.  Do not rush in there until you’re sure that the damage has been done and you and your helpers are safe entering the area.  In the immediate aftermath of the Oklahoma City bombing, various medical personnel rushed in to aid the many victims.  One of them was a heroic 37 year old Licensed Practical Nurse who, as she entered the area, was struck by a falling piece of concrete.  She sustained a head injury and died five 5 days later.

2. Sizing up the Scene:  Ask yourself the following questions:

3.  Sending for Help:  If modern medical care is available, call 911 and say (for example):  “I am calling to report a mass casualty incident involving a multi-vehicle auto accident at the intersection of Hollywood and Vine (location).  At least 7 people are injured and will require medical attention.  There may be people trapped in their cars and one vehicle is on fire.”

In three sentences, you have informed the authorities that a mass casualty event has occurred, what type of event it was, where it occurred, an approximate numbers of patients that may need care, and the types of care (burns) or equipment (jaws of life) that may be needed.  I’m sure you could do even better than I did above, but you want to inform the emergency medical services without much delay.

4.  Set-Up:  Determine likely areas for various triage levels (see below) to be further evaluated and treated.  Also, determine the appropriate entry and exit points for victims that need immediate transport to medical facilities, if they exist.  If you are blessed with lots of help at the scene, determine triage, treatment, and transport team leaders.

5. S.T.A.R.T.:  Triage uses the acronym S.T.A.R.T., which stands for Simple Triage and Rapid Treatment.   The first round of triage, known as “primary triage”, should be fast (30 seconds per patient if possible) and does not involve extensive treatment of injuries.  It should be focused on identifying the triage level of each patient.  Evaluation in primary triage consists mostly of quick evaluation of respirations (or the lack thereof), perfusion (adequacy of circulation), and mental status.  Other than controlling massive bleeding and clearing airways, very little treatment is performed in  primary triage.

Although there is no international standard for this, triage levels are usually determined by color:

Immediate (Red tag): The victim needs immediate medical care and will not survive if not treated quickly.  (for example, a major hemorrhagic wound/internal bleeding) Top priority for treatment.

Delayed (Yellow tag): The victim needs medical care within 2-4 hours. Injuries may become life-threatening if ignored, but can wait until Red tags are treated. (for example, open fracture of femur without major hemorrhage)

Expectant (Black tag): The victim is either deceased or is not expected to live.  (for example, open fracture of cranium with brain damage, multiple penetrating chest wounds)

Knowledge of this system allows a patient marking system that easily allows a caregiver to understand the urgency of a patient’s situation.  It should go without saying that, in a power-down situation without modern medical care, a lot of red tags and even some yellow tags will become black tags.  It will be difficult to save someone with a major internal bleeding episode without surgical intervention. 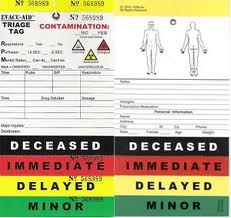 In the next part of this series, we will go through a typical mass casualty incident with 20 victims, and show how to proceed so as to provide the most benefit for the most people.

Are you prepared to deal with medical issues in situations where medical help is NOT on the way?  If you’ve got our Amazon Bestseller “The Survival Medicine Handbook”, you will be!