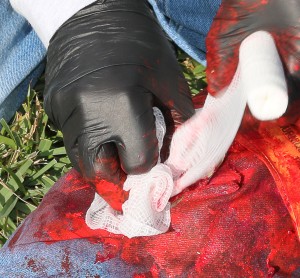 Given the spate of bombings and shootings throughout the world, most recently in Brussels but also in Paris and San Bernardino, we now realize that mass casualty incidents (also called MCIs) are becoming part of the “New Normal”. A mass casualty incident is any event in which the medical resources available are inadequate for the number and severity of injuries incurred.

Look at images of any terrorist attack, and you’ll see a lot of blood. These events tend to be over very quickly, but during that time, death from bleeding wounds can easily occur.

In a world where high level medical care is just minutes away, we have become secure in the notion that help is forthcoming. Unfortunately, it is rarely immediately at hand; the actions of individuals at the scene may make the difference between life and death. If aid isn’t administered in the first few minutes, hemorrhage can be fatal. In a mass casualty incident, the sheer number of those needing help could overwhelm the ability to attend to them.

Despite the urgency of the situation, law enforcement is taught not to approach the wounded until it is clear the threat has been neutralized. This is actually a wise move that avoids additional casualties, but adds a delay that may cost the wounded their lives. Therefore, the quick action needed may have to come from those involved but uninjured in the event. Of course, even these individuals should beware of continued hostile action before they rush to help.

How many know exactly how to stop a major hemorrhage? Just a few. Only those in the medical field or who take First Responder classes have been taught basic techniques, such as how to use a tourniquet. But although you can find fire extinguishers on the wall, there are no medical kits readily available to help these Good Samaritans. Is it time to have these items on the wall (in emergency, break glass?) and to teach how to stop bleeding as a subject in school and workplaces? As horrible as this sounds, It’s possible we have reached that point.

Disasters occur regularly, not just terrorist events but natural disasters such as tornadoes, as well. If hemorrhage first aid were a part of the curriculum, would it make a difference? Imagine a community full of people who learned to deal with injuries during their school years. Would there be lives saved, even if just by a witness to a car accident? How many lives would have to be saved for such a subject to be worthwhile to teach?

Also, is it time for basic medical kits to be placed in every teacher’s desk, workplace, and mall? Would it make people uncomfortable to see them? Probably as much as when you see a fire extinguisher.

Certainly, such a first aid course in schools would not be for kindergarteners, but for teenagers and teachers. Videos and demonstrations would be important to desensitize students to the topic. Of course, parents who are concerned that their child would be traumatized emotionally would protest. Perhaps, however, those who underwent the training might become a little imbued with sterner stuff than our current crop of college students, who cry out in anguish when their safe spaces are invaded.

These are hard times, and they come with hard realities. You might choose to live in denial of the “New Normal”, but I think you’d be grateful if the life of a loved one was saved by someone who learned Reading, ‘Riting, and Reduce hemorrhage.

You might want to add some medical supplies for a terror event to your medicine cabinet in these uncertain times, so check out Nurse Amy’s line of medical kits and individual items at store.doomandbloom.net.