The thyroid gland is positioned just in front of the trachea (the “windpipe”) and produces hormones that help regulate your metabolism.  The thyroid produces substances called Thyroxine (T4) and Triiodothyronine (T3) that regulate growth, energy and the body’s utilization of other hormones and vitamins.  The thyroid itself is regulated in turn by the pituitary gland in your brain, which tells the thyroid when to release T3 and T4.  To underscore the complexity of this process, the pituitary gland itself is regulated by another gland, the hypothalamus! Thyroid disease usually involves the production of either too little or too much of the hormones from these three organs.

Over 20 million Americans suffer from some form of thyroid disorder. Thyroid malfunction can occur in anyone, but is most commonly seen in women.

Some thyroid problems that are common in third world countries today may one day become prevalent here in a post-collapse situation.  One condition you may be familiar with is a “Goiter”; it is an enlargement of the gland that is the result (in 90% of cases) of a deficiency of iodine in the body. We rarely see this in developed countries because we are able to obtain iodine in our diet; indeed, it is the main reason why common table salt is “iodized”. A person may have a goiter without symptoms or even disturbed thyroid hormone levels.

Some thyroid masses may be cystic (filled with fluid) and some may be solid.  These masses are usually “cold”, that is, not producing hormone, and have no cancerous or major ill effect.  Thyroid cancer is relatively rare, even in the elderly, unless there has been exposure to radiation.  Increase in cases of thyroid cancer have been seen, for example, in children raised in the vicinity of the Chernobyl nuclear meltdown in 1986; most occurred many years after the disaster.

Determination of thyroid malfunction depends on certain blood tests and sometimes a scan of the gland.   This technology will be gone in a collapse, so it’s important to learn the various symptoms and signs that your patient may exhibit.

Symptoms and Types of Thyroid Disease The excessive production of thyroid hormone is known as Hyperthyroidism.  Some common signs and symptoms of  this condition in adults are:

Severe hyperthyroidism causes a condition known as Thyroid Storm, which causes major effects on the heart and brain, and is life-threatening. You may see symptoms such as rapid pulse, angina, irregular heart rhythms, and, eventually, heart failure.

Treatment of hyperthyroidism involves medications such as Propylthiouracil and Methimazole, which block thyroid function.  These medications should be stockpiled if you’re aware of a member of your group with hyperthyroidism, as they will be hard to find if modern medical care is no longer available.

Radiation therapy with radioactive iodine (“I-131”) has even been used to destroy the overactive thyroid, which, unfortunately, often results in the patient producing no thyroid hormone.  This drastic strategy is useful in severe hyperthyroidism, but is also unlikely to be available in a collapse.  Other forms of Iodide are useful in blocking the excessive production of thyroid hormone; kelp, for example, has high levels of Iodide. The anti-radiation medication KI (Potassium Iodide) might be another option in this situation.  Unfortunately, Iodides must be used with care, as they can occasionally worsen the condition.

Dietary restriction of nicotine, caffeine, alcohol and other substances that alter metabolism are helpful lifestyle changes for hyperthyroid patients.  Vitamins C and B12 are thought to have a beneficial effect on those with this condition.  L-Carnitine is thought to be beneficial in that it is helpful in treating elevated thyroid hormone levels without damaging the gland.  Some dietary strategies exist to depress production of thyroid hormone, including cabbage, cauliflower, broccoli, brussels sprouts, and spinach.  Foods high in antioxidants are thought to reduce free radicals that might be involved in hyperthyroidism.  These include blueberries, cherries, and tomatoes, squash and bell peppers, among others. 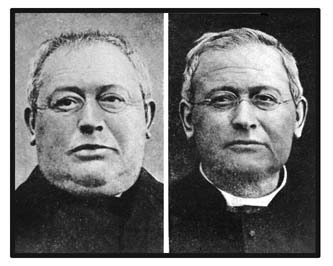 Classic hypothyroidism before treatment (left) and after treatment (right)

More commonly seen than hyperthyroidism, hypothyroidism is the failure to produce enough thyroid hormone.  Rarely, a newborn may be born without thyroid function; early diagnosis and the availability of modern hormone replacement drugs may prevent severe mental and physical handicaps.  Without these drugs, these infants will be in serious trouble.

Hypothyroidism in adults is manifested by the following symptoms:

The treatment of hypothyroidism is based on the oral replacement of the missing hormone.  These come in a variety of dosages, and it is important to determine the appropriate dose for your patient while modern medical care is still available.  Once you have determined this, you may consider asking a physician for a prescription for a higher dose, which would allow you to use, say, half of the pill in the present and stockpile the other half for the uncertain future.  This strategy depends mostly on the physician asked; you may find your doctor to be sympathetic to your concerns or you may hit a brick wall.

Besides standard thyroid drugs such as Synthroid and Levothyroid, there are a number of other remedies that may have an effect in improving hypothyroidism.  A number of thyroid extracts are available which consist of desiccated and powdered pig or cow thyroid gland.  The amount of thyroid hormone delivered by a particular extract may differ from bottle to bottle; therefore, the medical establishment recommends against the use of these supplements.

Having said this, in the absence of modern medications, it is better than nothing.  From a dietary standpoint, you should avoid foods that depress thyroid functions, such as cabbage, cauliflower, broccoli, brussels sprouts, and spinach.  A number of natural supplements, such as Thyromine, are commercially available.  These are combinations of various herbs that are touted as beneficial for both low and high thyroid conditions. Unfortunately, scientific studies proving their effect are scarce.

Learning the various signs and symptoms of a medical condition will help you become an effective medical resource in times of trouble.  Hypothyroidism and hyperthyroidism can be diagnosed by the survival medic if he or she sharpens those diagnostic skills. Without lab tests, scans and the other accoutrements of modern medicine, your knowledge and supplies will be all you have to keep your people healthy.