VIDEO: THE MANY USES FOR TRIANGULAR BANDAGES

Those of us who were members of the Boy Scouts (now Scouts BSA) might remember the neckwear that formed part of the uniform. It was known as a neckerchief or kerchief and, when folded, became a triangular piece of cloth that had many uses.

Now, many former scouts are still following the old motto: Be prepared. While the preparedness movement doesn’t have a uniform, triangular cloth can be found as a bandage in many medical kits meant for times of trouble.

And well it should. The triangular bandage is lightweight, compact, and versatile as all get-out. It’s also very affordable, and everyone should have a few in their medical storage.

But there’s more than what’s in the above video. The triangular bandage can do so much more!

What about bleeding wounds? Well, the bandage taken right out of the package would be a reasonable barrier for you to use to apply direct pressure on an injury. You can use one or several to pack into the wound as well. Also, it can be used as part of an improvised tourniquet similar to how it was used centuries ago. 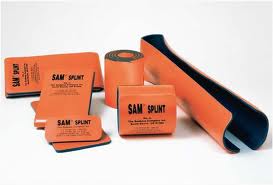 No SAM splint? You can use branches, blankets, pillows, paint stirring sticks, rulers, and any number of other creative ways to provide support and stabilization for the injury. That depends, of course, on the location and severity of the trauma.

If you’re in a survival setting, and the triangular bandages have run out, You can make your own out of any found cloth. if you do, try to make it in the form of a right triangle with dimensions of a good 40x40x56 inches. Choose a sturdy fabric like an old bedsheet.

Cut the fabric into a square of 40×40 inches and then in half diagonally. You might consider boiling your improvised bandage supply or otherwise disinfect them in case they have to used on an open wound.
Besides dressing injuries, a triangular bandage can be used as a separator between layers of gravel and sand in an improvised water filter. It can be used as a face mask, and I’ll bet you know a number of other uses.

Hey, don’t forget to fill those holes in your medical storage by checking out Nurse Amy’s entire line of medical kits, books, and more at store.doomandbloom.net. You’ll also find our books on various bestseller lists at Amazon.com.