WHICH ANTIBIOTICS TO HAVE? 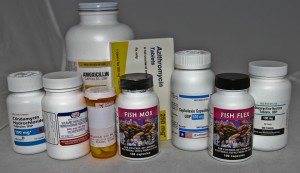 (NOTE: The information below is only meant for circumstances where there is no functioning medical system. If modern professional care is available, seek it out.)

If a disaster throws you off the grid, your risk of traumatic injury increases but also that of infection. When someone thinks of an infectious disease event, they envision a deadly epidemic. Any catastrophe, however, can increase the number of people with infections. When I say “catastrophe”, I’m not talking losing power from a storm for three days; I’m talking about a true long-term survival scenario.

In these horrific events, dirty wounds, contaminated water, poorly prepared food, and inadequate sanitation will turn previously healthy people into desperately sick ones. With antibiotics in your medical storage, you have a good shot of nipping those infections in the bud. Not having them could lead to tragic consequences.

One of the most frequent questions I receive from readers, listeners, and viewers is which antibiotics to have on hand in survival settings. I have received a flurry of these lately in response to our new book “Alton’s Antibiotics and Infectious Disease”: The Layman’s Guide To Available Antibacterials in Austere Settings. In the book, I discuss, well, antibiotics and infectious disease: The infections to be expected in those knocked off the gird and the antibiotics obtainable by the average citizen that help prevent otherwise avoidable deaths.

(NOTE: I don’t sell antibiotics nor own any part of a company that does.)

Certainly, it would be great if you had the financial resources to have all of the medications we talk about in Alton’s Antibiotics and Infectious Disease, but that’s beyond the means of almost everyone. You’ll probably need to pick a limited number to stockpile, but which? Chances are, if you lined up 10 doctors, you’d get 10 different answers.

Your choices would depend on the infections you’re most likely to encounter. Is it wound infections you’re concerned about, or intestinal infections like dysentery or cholera? Does someone in your group have a medical condition that makes them prone to a certain infection? Certainly, one drug doesn’t cure all.

Without knowing your individual situation, I can’t give you specifics.  I can, however, still give you my personal recommendation of a few antibiotics available in aquarium and avian form that would be assets in my survival medicine cabinet. This article would be too long to mention every disease these drugs treat or dosing (our book is more than 300 pages long), but I’ll mention a little about each.

1. For those who aren’t allergic to penicillin, I think either amoxicillin (Amoxil or fish-mox) or cephalexin (Keflex or fish-flex), both members of the beta-lactam family, would be good drugs to have around, especially for soft-tissue and bacterial upper respiratory infections. Dosing is relatively simple and, in most cases, safe for pregnant and pediatric patients.

2. Secondly, I would have doxycycline (bird-biotic), which handles a lot of different infections of the respiratory and intestinal tracts and is okay to take if you’re allergic to Penicillin drugs, although it isn’t considered acceptable for use during pregnancy. For those who claim doxycycline becomes toxic when expired, note that the Department of Defense’s Shelf Life Extension Program has, in the past, authorized its use well beyond the expiration dates.

3. Metronidazole (flagyl or fish-zole) is a drug which I consider very useful, especially for intestinal infection from bacteria and certain parasites, like Giardia, seen in intestinal and pelvic infections, among others. It is also used with other antibiotics in those with stubborn infections, for example, appendicitis, along with another antibiotic for situations where surgery isn’t an option. Although Metronidazole is acceptable in those allergic to penicillin, it’s not okay for pregnant or breastfeeding mothers.

4. Azithromycin (Z-Pak or Bird-Zithro) is known to be generally safe in pregnancy as well as those with penicillin allergies. It can deal with many cases of respiratory infection, dysentery, tonsillitis, sinusitis, and more. An additional benefit is that many in your group have taken it before in its popular “Z-Pak” form.

5. Clindamycin (also known as cleocin or Fish-Cin) would be on my list. It has been used to treat everything from acne to anthrax, but is helpful for pneumonias, pelvic infections, uterine infections after childbirth, soft-tissue infections, and is even effective against MRSA. It is, unlike doxycycline and metronidazole, acceptable for use during pregnancy and in people allergic to penicillin (of course, you could be allergic to clindamycin, or any other antibiotic, itself). In rare cases, use of clindamycin could induce an intestinal inflammation (colitis), which could be serious.

6. The Sulfa drug combination sulfamethoxazole/trimethoprim (Bactrim DS or fish sulfa forte) is an excellent choice for many infections, especially urinary ones. If that is a common problem for family members, you might consider this drug. It has also been used for skin infections, some sinusitis, MRSA, ear infections, and others. Sulfa-Drugs are acceptable in the penicillin-allergic but not in the pregnant woman or breastfeeding mother.

You may notice the above list doesn’t include Ciprofloxacin (Cipro, Fish-Flox), an antibiotic which is effective against many infections. I felt the side-effects of the drug, including weakness in the muscles and tendons, precluded my adding it. It’s still an option for some.

In our book “Alton’s Antibiotics and Infectious Disease”, we describe the various antibiotic families in detail. The drugs above each belong to a different family. If you could accumulate some of each over time, it would give you the best chance of having a medicine on hand that would have activity against almost any bacterial infection.

It’s important for you to know that every single medication I mentioned has its share of side-effects and reasons why they might be dangerous in some people, like those with kidney or liver disease. You should also learn to recognize the signs and symptoms of various infections. Indeed, antibiotics aren’t useful at all if you’ve misdiagnosed a viral infection as bacterial.

Antibiotics are not candy, and they should be used judiciously and rarely in survival settings. They will be scarce commodities, irreplaceable in a societal collapse, so accumulate a supply and utilize them wisely. To accomplish that goal requires not just funds, but a fund of knowledge and good judgment. If you’re successful, you might save the life of someone who otherwise might not survive in times of trouble.

Find out more about antibiotics and infectious disease in our new book “Alton’s Antibiotics and Infectious Disease: The Layman’s Guide to Available Antibacterials in Austere Settings”, now a #1 Amazon Bestseller in several categories! And don’t forget to fill those holes in your medical storage with kits and supplies from Nurse Amy’s entire line at store.doomandbloom.net!